AP Psych Fair is a hit 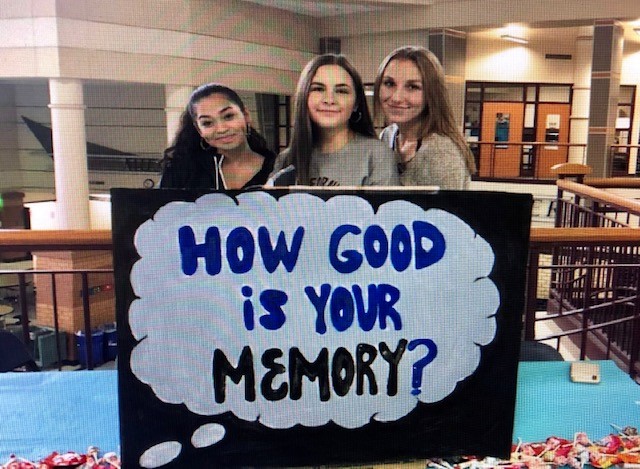 The second annual Psychology Fair was held at Prior Lake High School last month. Hundreds of students from all grades participated in several psychological experiments. But what actually is the psych fair?

The psych fair is an opportunity for AP psychology students to experience first hand what it’s like to run their very own psychology experiment. Groups of 2-4 people are responsible for everything from their hypothesis and getting administrative approval to trying to entice people to come to their stand and deciding how to record their results. The psych fair ran from 10:15 am-1:00 pm and hundreds of both staff and students participated in the experiments.

One of the experiments (run by Taylor Wermerskirchen, Anya Congreve, and Marcia Espinoza-Trelles) looked at whether words written in blue ink were remembered more than words written in black ink. They gave the participants lists of 12 words (either in blue or black ink) which they had a minute to memorize. Afterward, they had another 30 seconds to write down all the words that they had remembered. The group was worried about having enough participants for their experiment to be valid but ended up with over 115 participants. The group found that their hypothesis was correct and 422 words were remembered with blue ink and only 351 words were remembered with black ink.

Another experiment (run by Ella Fitterer, Hannah Ulsager, and Freya Congreve) ran under false pretenses, claiming to be studying if auditory, visual stimuli or both. However, what they were actually researching was which form of stimuli caused a larger increase in heart rate, with the video producing both as a control variable to check the increase wasn’t due to the feeling of pressure one may feel while being experimented on. This was done by including a jump scare in both the auditory and visual sections. For the visual group (those who watched a video with only a video play, and no sound) there heart rates increased by 7.62%. The auditory video (sound with no video playing) had people increase their heart rate by 8.41%. Those who watched a video with both a visual for them to watch and sound, included no jump scare and had people’s heart rates decrease by 6.64%. As shown in these statistics, the results show that people got more scared by sound then by a physical video.

Many other experiments just like this took place at Psychology Fair. Each one investigated different hypotheses about the brain. This event wouldn’t have been possible without the organization and support given by Mrs. Wolf; as well as the help given by the custodial staff and everyone who participated in the experiments. The Psychology Fair was an exciting and interesting thing to take part in and AP Psychology is a good opportunity for anyone who is interested in Psychology.