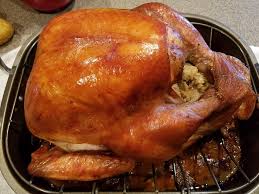 Thanksgiving is a holiday that every American has celebrated since they were born.

However, what tends to be a shock to them is that it isn’t commonly known about or celebrated anywhere else. Growing up in England, the only holiday we celebrated in November was Bonfire Night. This takes place on the 5th of November and most people celebrate by having bonfires and setting off fireworks. Bonfire night celebrates the discovery and destruction of a plot to blow up the Houses of Parliament. So, when we came to the United States, we were rather shocked that there was a whole new holiday.

For a holiday that is so widely celebrated here in the US, lots of people appear shocked when we say we have never celebrated Thanksgiving. This is strange since the story behind this popular holiday is an extremely important one in the history of the United States. Thanksgiving is celebrated because of the harvest feast shared by the Pilgrims (English Colonists) and American Indians in 1621. This feast between the two groups resulted in a peace treaty that lasted many years. The celebration of America’s Thanksgiving takes place on the last Thursday in November.

Before moving to the U.S. we had little idea about what Thanksgiving really was. The only information we had about Thanksgiving came from American TV shows like Friends. This meant that it was extremely exciting when we were able to experience the holiday for the first time last year. Many of our friends and family back in England couldn’t believe that we were going to celebrate an actual American Thanksgiving since it’s something people had only ever seen on TV.

Our Mum, who is from Minnesota, is very familiar with the holiday. For our first Thanksgiving last year we hauled in a car and drove four hours up North with our parents to Herbster – where our grandparents live – along with our auntie, uncle, and cousins. Once there, we experienced what we assume to be typical Thanksgiving traditions. Our Grandparents cooked a feast of turkey, mashed potatoes, carrots, gravy and much, much more — half of which went to the dog. Before eating, everyone said their thanks. Some of us were thankful for the food, others for good health, and all of us for our family. After dinner we all helped clean up then ate some pie. This was also something new to us.

Normally, when we think of a pie it includes steak, potato, chicken, gravy and other ingredients, not all together of course, so the concept of a pumpkin or chocolate pie was completely foreign to us. We then went on to play several board games and had a lot of fun. This year, however, we hosted Thanksgiving at our house, and this led to some English delicacies being added to the traditional Thanksgiving meal such as Yorkshire Puddings.