The Long Road to Victory 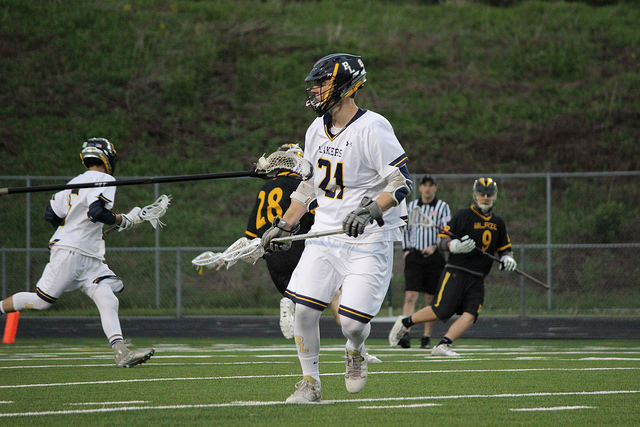 Devin Truso was a big impact player on the Prior Lake Boys Lacrosse team’s state tournament victory scoring 7 total points in just 3 games in the tournament. Earlier in the regular season, Prior Lake lost to Lakeville North 6-9, but when it came to crunch time and the biggest game most of these kids will ever play, Prior Lake was able to redeem themselves with a 12-5 victory in the state championship game.

This game took place on June 18, 2016 at 6 PM o’clock at Maple Grove High School. Prior Lake had never won a state championship in lacrosse and represented the first state championship for any Prior Lake team in 37 years. This is why Devin Truso says, “This wasn’t just a big game for us as a team and our fans but mainly for our whole city.” As Devin Truso is going into his senior year in high school, he hopes to have an even better season than last year and win the state championship back-to-back years. Devin also remarked, “The way we are practicing and if we can some of the younger kids to step in and try to be leaders, we have a great chance in winning again.”

Devin also talked about his teammate and other captain, Preston Jelen (Junior). “Jelen was a huge impact on helping us win this year. He is a great defenseman and a great leader to look up to on and off the field. Also don’t forget, Preston is a Junior as of now and has a lot more room to improve his game even more.”

This game was by far the biggest sporting event that has happened that whole year. It was a great experience not only for the players, but for the fans as well.

Devin also talked about how he has never seen so many people at a high school lacrosse game. When asked why they were able to pull off the win, Devin responded, “There were a few reasons we won the game. One being all the hard work we put in as a team and coaches. Two being the team chemistry being closer than ever. Three being the fans constantly being there for us and cheering us on no matter what happened.”

Devin also talked about how he would like to focus on his lacrosse in college as well and possibly be able to play somewhere for a college.  Devin went on to say how he and his teammates need to stay humble about how well their season went because Lakeville North will definitely be looking for revenge this coming season.

Once the season was over, Devin was given the great opportunity to be a captain again for his senior year. He is  “honored to be a captain of this team and try to lead my team to another championship, but I always remind myself to stay humble through my victories and awards. I am not the only one winning the game; I give all the credit to our wins and awards to my teammates, coaches, fans, and my parents.”

Just by talking to Devin, it was easy to tell he is a very good leader who is a humble and classy player for the Lakers as they try to win another state title.