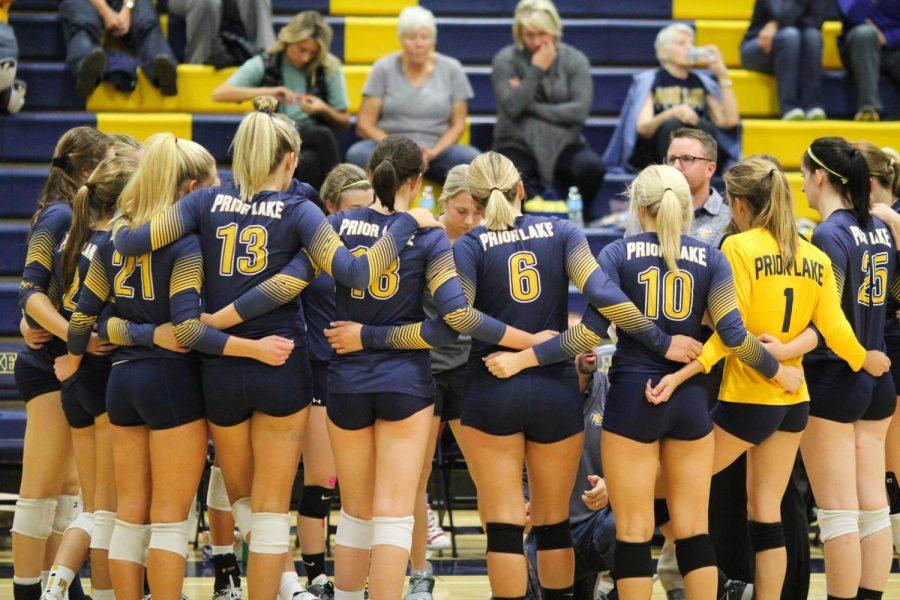 What a year!  After an incredible season, the Prior Lake Girls Volleyball team earned their ticket to their second straight State Volleyball tournament by sweeping Shakopee all three sets, and becoming the Section 2AAA champs.  The Prior Lake girls volleyball team ended with an overall record of (25-6), ranked 5th in the state. This is a very impressive resume for the Lakers, however, carrying the success from the season to the State tournament is a tall order. The Lakers are no strangers to winning games in the State tournament.  Last year they made it all the way to the championship game only to fall short to the Eagan Wildcats 3 sets to 2.

They made it! The Lakers played at the XCel Energy Center against the Lakeville South Cougars (28-3 overall).  It was a tough match up.  In conference and tournament play during the season, the Lakers had beaten the Cougars.  Jumping out to a 2-0 set lead, everyone was hopeful.  In set 3, the Cougars, led by senior Jenny Mosser,  found their game.  In the end, the Lakers lost to the Cougars 3 sets to 2.

Head Coach Mr.Dean and his Lakers were up for their next challenge, however.  The Lakers sailed past Grand Rapids in three sets and Moorhead in four sets to win the consolation trophy. Junior libero CC McGraw was named by a panel of coaches to the 2016 State Volleyball All-Tournament Team.

Junior Hannah Reis (#10) who is a left side hitter was excited to be in the state tournament again. On the topic of how the team last year compares to the team this year she remarked, “The key to a great team is team chemistry, and this is the closest team I have ever been on.”  This young and upcoming Prior Lake girls volleyball program has really made a name for themselves the last few years, and they are poised to do special things in the future.